Color and light: the power hidden in colors. Theory 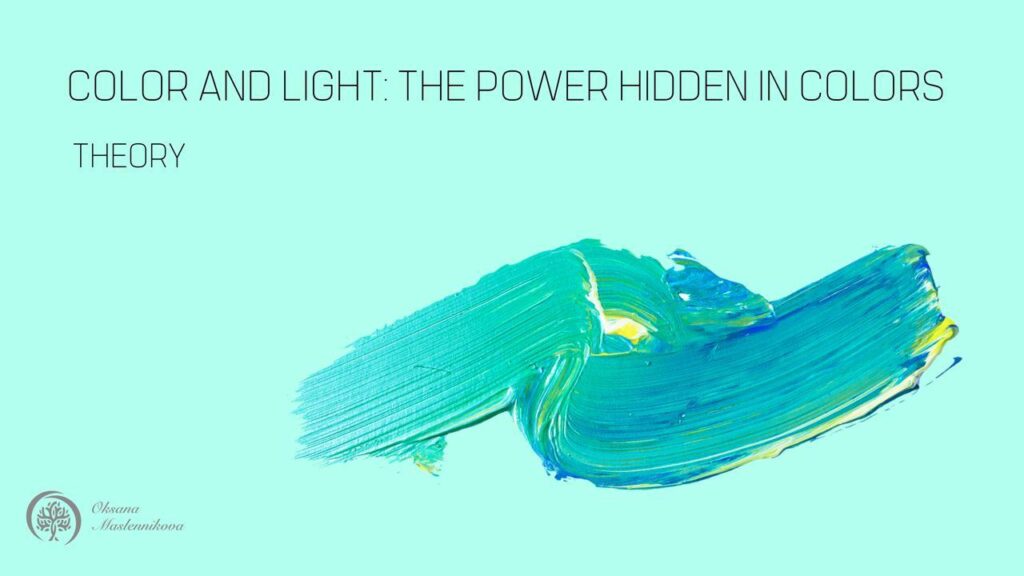 The main theory of color, which can be traced in the works of various scientists, and which most fully explains the essence of creating colors — the three-component nature of light radiation.

Scientists believe that a color consists of three components-red, green, and blue — that can be mixed to create all the existing colors.

The very idea of getting color from light was put forward by Isaac Newton, who conducted the famous experiment with a prism. Using a prism, the scientist decomposed white light into its colored components, obtaining a rainbow.

In the early nineteenth century, the English naturalist Thomas Jung continued Newton’s experiments on color mixing and found that it was enough to have only three components of the spectrum to get all the other colors, including black and white. But, as it turned out, it’s not the components themselves, since different triples give the same results, but the nerve fibers of the retina that analyze radiation. Jung’s theory is the theory of three-component color.

From his theory originates another, biological, explaining the mechanism of perception and processing of color by the brain-trichromatism.

Other theories were based on Jung’s discoveries, in addition, his RGB color system is still used in the field of technology, since all monitors, both on televisions and computers, have only three types of pixels: red, blue and green.

The German physiologist Ewald Goering took a different view of color theory. He pointed out that pure colors are grouped in pairs so that one element is never detected in a color at the same time as another. According to this theory, red is opposed to green, blue to yellow, and white to black. Goering called these pairs opponent pairs and linked them to six specific mechanisms in the retina. The opposing theory is that the brain perceives not the colors themselves, but the difference in brightness. This hypothesis allowed us to explain not only the phenomena of pure colors and three components, but also many other psychological phenomena of color vision, which helped to make a significant contribution to science.

In 1981, the Nobel prize was awarded to David Hubel and Torsten Wiesel for developing Ewald Goering’s opposing theory of color.

Goring’s hypothesis is based on an artistic theory in which the key colors are red, yellow, and blue. It can be explained simply: by mixing the three above colors in different combinations, you can get all the colors of the spectrum, but it is impossible to output them separately. According to Jung’s theory, mixing red and green produces yellow, but if you do it on a palette, you get brown. Green is considered an additional color that can be obtained by mixing yellow and blue.

The development of these works led to the creation of the theory of primary colors, which States that there are fundamental colors, mixing which you can get all the other colors and shades, and there is always a system of three linearly independent colors, each of which can not be represented as the sum of any quantities of two other colors. There are infinitely many systems of linearly independent colors, and since the transition from one system to another is carried out using simple relations, the color can be expressed in any of the three-dimensional systems.

The emergence of the concept of primary colors is associated with the need to reproduce colors for which the artist’s palette did not have an exact equivalent. The development of color reproduction techniques required minimizing the number of such colors, and therefore conceptually complementary methods for obtaining mixed colors were developed: mixing color rays (from light sources with a certain spectral composition) and mixing paints (reflecting light and having their own characteristic reflection spectra). Thus, there are additive and subtractive mixing models.

Additive color mixing is a method of color synthesis based on adding the colors of directly radiating objects. This method is based on the features of the structure of the human visual analyzer, in particular, on such a phenomenon as metamerism.

Metamerism is the property of vision in which light of different spectral composition can cause a feeling of the same color. In a narrower sense, metamerism refers to the phenomenon when two colored samples are perceived to be equally colored under the same light source, but lose their similarity under different lighting conditions (with different spectral characteristics of the emitted light). Physiologically metamerism of view based on the structure of the peripheral visual analyzer. In humans, this function is performed by the retina, in which the above — mentioned photoreceptor cells-cones-are responsible for color perception. In our eyes, there are three types of cones that are responsible for the perception of light in the violet-blue, green-yellow and yellow-red parts of the spectrum. The sensitivity ranges of these three types of cones partially overlap, so if light with different spectral composition produces the same integral effect on the cones, the corresponding colors are perceived as the same.

In the case of light reflected or passing through transparent originals, the appearance of the same color when using different sets of pigments depends on the lighting. Reflected or transmitted light is partially absorbed by the pigment, but the final spectrum of light perceived by the eye depends not only on the characteristics of the pigment, but also on the characteristics of the light source. Because of this, two samples that are perceived to be the same in daylight may differ by eye in artificial light.

The standard for additive color mixing is the RGB color space model. By mixing the three primary colors – red, green, and blue-in a certain ratio, you can reproduce most of the colors that people perceive. Additive mixing is used in computer monitors or television screens, where the color image is obtained from red, green, and blue dots.

In contrast to additive color mixing, there are subtractive synthesis schemes.

Subtractive color synthesis is a method that uses light reflection and appropriate dyes. In the subtractive mixing model, colors are obtained as paint mixing. In the absence of paint, there is no color – white, the maximum mixing gives black. An example of a subtractive color model is CMYK (Cyan, Magenta, Yellow, Key color) – a four-color autotype.

Four-color autotype is a subtractive color formation scheme used primarily in printing for standard triad printing. Compared to RGB, the CMYK scheme has a smaller color gamut. In Russian, these colors are called blue, purple, and yellow, although the former is more accurately called blue-green, and Magenta is only part of the purple spectrum. Printing with four colors corresponding to CMYK is also called printing with triad colors.

The color in CMYK depends not only on the spectral characteristics of the dyes and how they are applied, but also on their quantity, paper characteristics, and other factors. In fact, the CMYK numbers are just a set of hardware data for a photo-typing machine and do not determine the color unambiguously. So, historically, there have been several standardized offset printing processes in different countries.

Today, these are American, European, and Japanese standards for coated and non-coated paper. Standardized papers and paints have been developed for these processes. The corresponding CMYK models are also created for them, which are used in color separation processes. However, many printing houses that employ highly qualified specialists often create a profile describing the printing process of a specific printing machine with a specific paper.